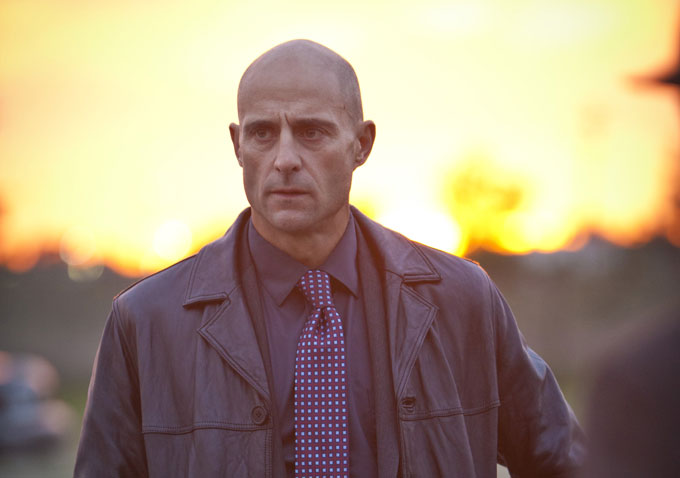 Over two years, AMC cultivated a reputation as the new home for quality programming on television. In 2007, the channel premiered its first original series, Mad Men, and the next year it followed that up with a second, Breaking Bad. Those two series have gone on to become two of the greatest shows of all time, to the point where it is quite possible one of them may eventually be my favorite television show ever. It was a one-two punch that made AMC the king of prestige dramas over-night, but it created a bubble that was bound to burst. Lightning was bottled twice, but since then the network has been desperate for even a drop of rain.

That's not, strictly speaking, true, which is another way of saying that is total bullshit. AMC has had great successes since its two crowning achievements premiered (The Walking Dead may not be great television, but it is one of the highest rated shows currently on the air), but it has been unable to recapture the critical acclaim of its brightest stars, and unable to remain a part of the zeitgeist as a network on the rise. In some ways, Low Winter Sun feels like an attempt to regain the spotlight. Yet for much of its pilot, the show feels more like yet another drama with a great looking shell hiding an empty core. These faux-shows have the look and feel of a great drama but none of the weight or depth of their forebears. Like House of Card>s, The Killing or this summer's The Bridge, Low Winter Sun looks fantastic, boasts strong actors, and a premise that sounds intriguing, but it all feels empty. There's no point to any of this except that it has worked elsewhere previously, and smart television viewers are unlikely to be duped by a look-alike.

That isn't to say Low Winter Sun is awful, or even that it is not pretty good. While this pilot has problems (which we'll get to), I could see this becoming a solid mid-tier drama, or even turning into a contender for greatness. There is just also a lot of evidence here that instead of trying something new, the show has decided to warm over the male anti-hero genre and hope fans of breaking bad will stick around to see another desperate bald man try to fight his way out of a corner he painted himself into. The show focuses on Frank (Mark Strong, that previously mentioned bald guy) and Joe (Lennie James), two cops who find trouble after agreeing to murder Joe's partner and make it look like a suicide.

This murder, which happens even before the opening credits roll, is the first big problem for the show. The pilot works overtime to try to convince us that Frank is a "good" person and a "good" cop, but his world shatters so early on, and we spend so much time just looking at the pieces and where they've fallen, its hard to get a feel for Frank at all. If he's a good cop who has done something bad, the show has shown us only the act and not the man who performed it. If he's a bad cop feigning at being good, the show spends too long trying to convince us to play along. I expect what the show is aiming for is a morally ambiguous central figure; what they have created instead in this pilot is a muddled mess of a character whose intentions remain unclear and whose personality is nonexistent. Frank isn't a person in this first hour, he is lines of dialogue read by an actor.

Because that actor is Mark Strong, Frank coalesces better than he otherwise might. Strong is a strong actor giving an intense performance from the start, but he;s digging his teeth into a rice cake like it's a steak, and his teeth are finding mostly air. Lennie James is better served by the pilot, which paints Joe immediately as an excellent salesman, a slippery yet persuasive cipher whose motivations are willfully unclear. Joe is likely dirty, but knows how to appeal to the clean cop in Frank to get him to cross some lines. Joe's ambiguity is more sketched in, and James plays all angles of it wonderfully. If this pilot has a standout, its him, and if you're looking for a reason to watch, his performance may well be enough to tempt you.

Another thing which may interest viewers is the sense of place. The show is set in Detroit, and while the pilot is too busy setting its plot gears in motion to ruminate too much on the city it takes place in, there's a grimy realism to each scene and setting that marks this as America's lost city. Earlier this summer, The Bridge was celebrated for its sense of place, but where that show simply felt as if it was properly set in El Paso and Juarez, Low Winter Sun feels like it was meant to be staged in Detroit (which is funny, seeing as both shows are remakes of foreign products, and this one was previously a British miniseries). It's easy to imagine people like Frank and Joe losing themselves in this urban wilderness, and if the show leans into its setting hard, it may become important commentary on the way this country has failed Detroit and the way the city has failed its people.

The dramas Low Winter Sun wants to emulate all had moments in their pilots that hinted at the depths the main characters possessed. Breaking Bad has Walter White taping a farewell message to his family. Mad Men has Don Draper flitting from mask to mask, as pitchman, businessman, boyfriend, and husband, never for one moment seeming as comfortable in his own skin as he's putting on. Low Winter Sun has...Frank chugging a bunch of whiskey in its opening shot, maybe? There's nothing here that hints at the show as anything more than a plot delivery device, and while the plot is sort of engrossing, even that hinges too much on the characters being compelling for the show to ignore them entirely. It's clear we're supposed to care about the ethics of the two central characters, whether they are compromised, and whether they will be brought down by what they've done, but nothing in the pilot makes them seem like people rather than paper dolls moving around to serve a greater plot. If this story is to be a battle for the souls of two cops in a dying city, we're going to have to care for those cops, or at least understand them. It's not enough for these characters to do things, they must also feel like actual three-dimensional human beings, and in this hour, at least, they don't. Joe, at least, feels like the sort of character who exists beyond the story at hand, and James makes him a lot of fun to watch. But Frank seems to have blinked into existence at the moment the pilot began, and brief flashbacks do less to engender interest in his backstory than to make my eyes roll at the direction this is all likely to head.

Low Winter Sun is unlikely to ruin your evening if you watch it, but it is also unlikely to enliven it in the way great TV can. This is the prestige drama as mindless television, and I imagine each episode will fade from my memory soon after the credits roll. It's not bad television, it just isn't very good television, and it is yet another show that thinks it is much better than it is. This is a show that feels like a warmed over version of a million things you've seen before. It looks pretty on the surface, but press too hard, and you'll find there's nothing at its center.

-I won't be reviewing Low Winter Sun weekly, unless there's some outcry for coverage from readers (I'm going to guess you super fans are calling yourself Sun-nies?). I will probably keep watching it, especially since it airs right after Breaking Bad and is fine enough as an hour to gather my thoughts, but Sunday night will soon be full of other, better shows for me to write about, and unless you guys push for it, I think this one needs no further coverage as of now.

-"Folks talk about morality like its black and white. Or maybe they smarter, at a cocktail party acting like they pretentious and they say its gray. But you know what it really is? Its a strobe light, flashing back and forth. And all we can do is try to see straight enough to keep our heads from getting bashed in."

-"He was two different strains of cockroach. I didn't think he could be killed."
Tags: Low Winter Sun
comments powered by Disqus