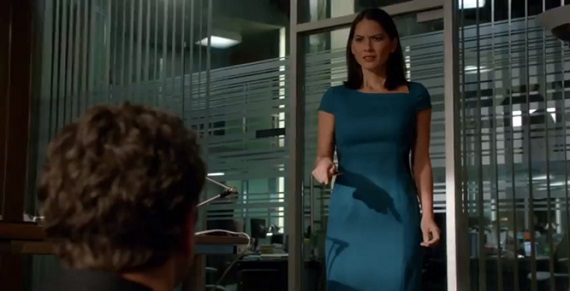 
The Newsroom is starting to pick up, I'm glad to see. The storylines are beginning to really take shape for most of the characters.
\tThe preview for this week's episode didn't look like anything special, and I can see why. Even Will's storyline, which is usually the most interesting, didn't captivate me. The voicemail thing was cute last season when Will refused to say what was on it, but now it's getting annoying. The scene where he takes Hope Davis to the executive dining room to appeal to her conscience was a good scene, but otherwise Will wasn't anything special this episode. Even him and Charlie, which always makes for good scenes, fell flat, when their attempt to blackmail their boss failed. I thought you could even see it in the actors faces as they were overacting and yelling that they knew the scene was a little weak.
I'm still not sure I love Jim's storyline. He left to get away from Maggie and Don, who conveniently split as soon as he left. Meanwhile, he's developing a relationship with this girl on the bus with him where he tries to drag her into being a journalist of integrity. I can only imagine she's later going to reprimand him for presuming to teach her how she should do things, before falling in love with him anyway.
God knows a lot of the 2012 republican campaign was pretty indefensible, and even more so the primaries, but the straw man writing of every reporter and organizer who isn't Jim on the bus following Mitt Romney's primary campaign tour is pretty egregious. Yes, Mitt Romney never really seemed to know what he was promising, and yes, you could hardly expect more from those who followed and worshipped him, but it's wearing out what was a very weak joke to begin with to make ever right-leaning journalist so obtuse and downright rude. I can't believe that in a presidential campaign, where media presence is everything, a candidate could afford to alienate or even make an enemy of a major network correspondent"”then again, this is Mitt Romney, who was never really known for catering to the little guy.
Similarly, but maybe fittingly, the Occupy Wall Street movement in Neal's storyline is being made out to be a bunch of goofballs, sure they're angry about the state of affairs but not really sure how to go about fighting for it. I also like seeing the genesis of a movement that was so recent yet most people took no note of or didn't even hear about until it involved many thousands of people. I like that if Sorkin is going to call Republicans out on their half-baked grandstanding, he at least shows Democrats the same courtesy. More specifically to the story, it was an important line for Neal, who's always been very polite, to call out McKenzie for dismissing the movement mostly because she already has and makes a lot of money. As someone who makes a career out of standing up for the downtrodden, you can see the hurt on her face when she realizes that she's discounting a very unfairly treated demographic acting out in the only way they know how.
Don and Sloan are shaping up to be the best part of the season for me. Don's thing about putting tires on his chair while Sloan comes to him for big brotherly advice was a cute scene. The way he cared who Sloan was going out with was pretty cute as well. My gripe with it is that they only ever seem to be cute together, rather than doing anything important together in scenes that affect the larger story. I don't know, maybe he'll find that because of something about their personalities or through some personal chemistry he'll fall in love with Sloan in a way he never did with Maggie, and finally be the good boyfriend he always wanted to be.
I'm still waiting for something big. Last season's storyline was about a former titan news anchor who slowly lost his teeth until he hosted little more than a morning show, who is woken back up by someone from his past reminding him what broadcast news should be. It was a powerful setting for a cable drama, and for the most part it really, really worked. I won't say this season isn't as good, but only that it seems to be taking its time to get off the ground. It's only been three episode so far, so I'm going to be optimistic and hope that the season is back loaded with some real wow moments.
\t
Grade: B-
Other Thoughts:
-I was torn between loving Will's rant against cowardly, homophobic republican candidates and cringing at how thinly veiled a soapbox some of Aaron Sorkin's work is.
-Don falling off of his chair made me laugh pretty hard both times. Something about that scene just seemed to click for the characters.
-But who the hell is Zane and where did he come from?
-The preview for next week looks pretty intense. Are we going to get any more insight into what horrific events Maggie got involved in in Africa? Or did she just get