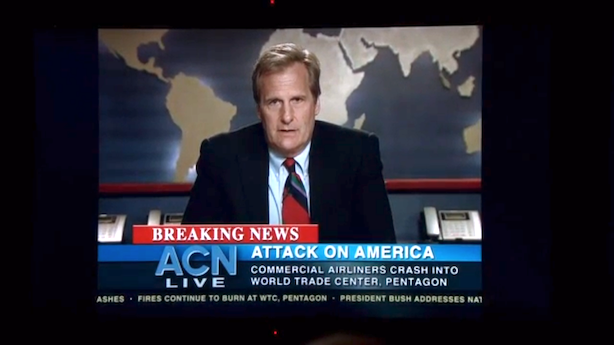 I feel like The Newsroom still hasn't quite gotten into the swing of the season yet. We're still hearing only the beginnings about Operation Genoa that traumatized Maggie and we don't even know what happened to Gary. Still, I find myself thoroughly entertained by it.

I don't really know what I expected for the September 11th memorial broadcast. I sort of figured it would be the focal point of an episode, but it turned out to be more of a background event, a 20-second vignette in a montage towards the end of the episode. I guess they were pretty heavy on Will's self-dissatisfaction last week and wanted to lighten up. I also didn't know how to feel in that scene they shoehorned in where the tech guys are watching Will's broadcast from September 11th, 2001. When the scene opened up, it got me excited, like we were going to see something as powerful as his speech in the pilot, but it sort of fell flat. Even that I could see working, in showing how Will was scared to death and didn't know what he was doing, but felt dedicated to continuing to report the news. But when Charlie came in and awkwardly reminded the viewer that Will had an abusive childhood, before half-assedly comparing looking out for his younger siblings with broadcast journalism.

I think I'd have to say that I prefer the adults' storylines to the kids'. I feel weird dividing it like that, since most of the "kids" are in their mid-to-late 20s, but there's a definite distinction between the two types of storylines in this show: the executives and senior producers all have these big sweeping plot arcs that I find absolutely riveting, whether they be about the politics of broadcast or the ghosts that haunt each character. The younger members of the staff, however, are like a network drama series about 20-somethings. I really can't care about Jim and Maggie and Lisa. Even Neal hasn't been doing much for me, except when he causes Will to come show a police officer what's what with some quick thinking about bringing video evidence. Funnily enough, Don is in the middle of these two groups in age, and accordingly is half interesting, half gratingly boring. He at least has something going for him when he's not involved in petty relationship scenery chewing.

This show has really made me come around on Olivia Munn. I guess I somehow lumped her in with the likes of Megan Fox and Heidi Klum, and that's on me for writing her off. I like a character that's "the hot girl" that doesn't just pretend she's not hot, but is aware of it and bitterly resents that she isn't judged solely based on merit. The only thing that bugs me is the attempts to make her cutely slobby are sometimes too blatant, especially when a minute later she gets excited about closets to show she really is girly in some ways. Maybe Aaron Sorkin is just projecting his fantasies into his characters again.

I still feel like I don't have enough information this season for my thoughts about it to be complete. I think after next week's episode I'll have a bit more to say. All in all, the season seems to be picking up nicely, and this week was a slight improvement over last week.

-Okay, Will cares a lot about what people think of him, even too much. But a whole scene in which he Googles "Will McAvoy hate" just so he can wallow is laying it on a little thick. In the next scene where he's looking at it on his laptop during commercial breaks is downright parody.

-At first I hated Don, but now I like him. I can't tell if I just assumed he was a dick at first based on characters I've seen the actor play in the past, or if he actually started out looking pretty bad and there was an effort made to depict him more sympathetically.

-So help me God if Jim wanders into a fling with this Republican girl I am going to lose it.

-I actually take issue with the way the Republican reporters following Romney's speaking tour are being portrayed, but I'm going to give Sorkin the benefit of the doubt for one more episode to see if he's going somewhere with it.

-I've never cared much for Lisa, but I do like when
comments powered by Disqus