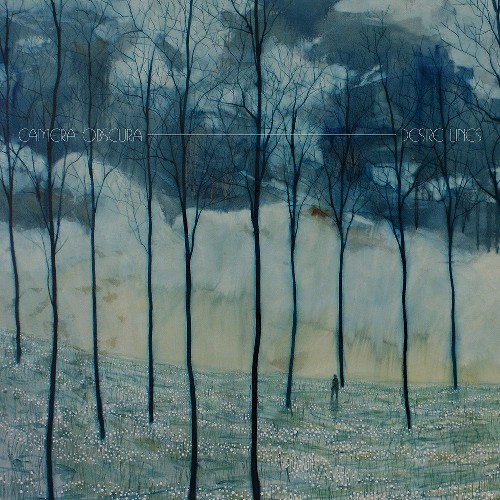 Bottom Line: Cutesy indie pop that sticks out due to its dynamic instrumentation.

As an indie pop group from Glasgow, Scotland, I'm going to try to keep the comparisons to Belle & Sebastian to a minimum, even if both have songs and lyrics so cutesy they can be considered "twee" (whatever that means) and use all sorts of instrumentation to create catchy hooks around their mellow vocals. Okay fine, they do have their similarities, especially with Desire Lines, but I consider that to be a very good thing. The songs on Desire Lines range from jazzy ("This is Love (Feels Alright") to rock ("Do It Again") to retro-sounding ballads ("Fifth In Line to the Throne") to synthesizer based ("Break It To You Gently") to country ("Desire Lines"). The main unifying factor is Tracyenne Campbell's emotive and usually sorrowful voice, though most of the lyrics sound like they were ripped from a hipster college girl's diary. I'll admit that at times the songs can be a bit monotonous despite their diversity, but fans of indie pop (particularly the Belle & Sebastian blend) should definitely check this one out.

Capital Cities - In A Tidal Wave of Mystery When I first heard the single from this album "Safe and Sound" on the radio, I thought "oh wow, they're going for the early MGMT sound but they're not bad at it!" Then I listened to the whole album once through and thought "wow, they have better beats than MGMT and a lot of different sounds!" To their credit, songs like "Patience Gets Us Nowhere Fast," I Sold MY Bed, But Not My Stereo" and "Center Stage" are damn catchy, and the use of horn sounds and funkier styles make them stick out from other indie electronica groups. However, each listen-through after that has slightly decreased my excitement, partially because the album suffers from the common electronic music condition known as "dumb lyrics." Songs like "Kangaroo Court," "Chasing You" and "Love Away" all contain some pretty awful lines, though the song "Farah Fawcett Hair" takes the cake with its awful sampling that not even an Andre 3000 cameo can save. Essentially it's a half good album, particularly if you ignore the lyrics.

Bottom Line: Queens of the Stone Age get experimental. Right off the bat I could tell this album was going to be divisive. Queens of the Stone Age are known for their droning, repetitive riffs on their hard rocking tracks, something I generally expect to hear in droves when I put on any of their albums. Imagine my surprise when I first heard "Keep Your Eyes Peeled," a slow, grinding song that has all of the droning none of the radio-friendly rocking. Tracks like "I Say By the Ocean" and "My God Is The Sun" are the Queens of the Stone Age you've come to know and love, but then when you hear the mild piano tune of "The Vampyre of Time and Memory" and the dreamy waltz "Kalopsia," you may wonder if your iTunes has malfunctioned and skipped to another band. Then there are the rock tracks that lack the typical QOTSA style, such as "If I Had A Tail" and "Smooth Sailing," the latter of which is a Bowie reminiscent glam rock inspired song. Yep. And with guest vocals by Alex Turner, Trent Reznor, and Elton John, this definitely is their most eclectic album. While "¦Like Clockwork might not be the album to listen to if you're expecting typical Queens of the Stone Age, it is an interesting and largely successful step in several new directions.

Empire of the Sun - Ice On The Dune First off, look at that goddamn album cover and tell me it's not the best album cover of 2013. Anyway, though Empire of the Sun's debut Walking On a Dream was filled with electro-pop sensations and the occasional out-there experimental moment, Ice on the Dune is almost entirely straightforward dance music. The dance beats start right off the bat with second track "DNA" and only let up for tracks like the mellow 80s-sounding "I'll Be Around" and the out-of-place closer "Keep A Watch." But for the most part each track contains a thumping beat and Luke Steele and Nick Littlemore's trademark vocals that go between Michael Jackson falsetto and what sounds like an over the top David Bowie impression. The tracks are so dance-y that the experimental tracks like "Surround Sound" are more out of place than the over-the-top pounding of "Old Favours." Critics may say that the album is fairly monotonous and lacks the subtlety of their debut, and I'll admit the lyrics aren't exactly "profound" (again, something apparently common with electronic music), but if you're looking for an album of straightforward dance music with frequent flares of creativity, this is definitely one to check out.

Bottom Line: A darker, well-produced album with a few missteps. I'll admit that I'm not a Kanye expert like some of my friends, but I do know that I enjoyed most of the songs on My Beautiful Dark Twisted Fantasy a lot. I never really got too into Watch the Throne and disliked most of Cruel Summer, but I was willing to give another just-plain-Kanye-West album a try. Expecting another grand-scale album like My Beautiful Dark Twisted Fantasy, I instead received the stripped-down electronic beats and dark tones that sum up Yeezus. I have to say that I actually really enjoy the album's production, and love the beats of the first few tracks. For example, the techno backing of "On Sight" is a great fit, and "Black Skinhead" perfectly flows into "I Am A God." The album also shows Kanye also knows what he's doing with sampling, most notably in "Blood On The Leaves" and excellent closing track "Bound 2." However, there are some missteps here, like the awful "I'm In It," which sounds like an outtake from Cruel Summer and isn't helped by its Bon Iver cameo. And despite being a generally good track, Chief Keef's intro and verse in "Handle My Liquor" come on a little strong. In terms of the raps, many of them have West's trademark ego (I absolutely love the lyric "In a French-ass restaurant/hurry up with my damn croissants!" in "I Am A God") and clever humor ("Slightly scratch your Corolla/Okay, I smashed your Corolla"), but there are some blunders. For example, "I just talked to Jesus/He said what up Yeezus" is a little cringe-worthy and "Fuck you and your corporation" would sound more authentic coming out the mouth of Bill Gates. Additionally, an oddly high number of tracks mention oral sex and Kanye having sex with your spouse. Overall, Yeezus isn't bad, but it's far from perfect (which Kanye believes he is regardless).

Bottom Line: An album with a slew of new sounds for the band, almost all of which work. I'll admit that Sigur Ros's 2012 album Valtari really didn't do much for me, and I truthfully expected an album that came out only a year later with one band member fewer (their keyboardist Kjartan Sveinsson left last year) to be really bland and rushed. Instead, Kveikur opens with "Brennisteinn," which is unexpectedly heavy and almost has industrial-style instrumentation. The tracks lack the orchestral beauty of Takk and the pep and happiness of MeÃ° SuÃ° Ã­ Eyrum ViÃ° Spilum Endalaust, and with the exceptions of "Stormur" and "Rafstraumur" most of the tracks on Kveikur aren't really that accessible. But don't think this means the tracks are not good, as most of these are solid, heavier, experimental numbers that still have the bands trademark ambient style and Jonsi's falsetto vocals. After all, for a band whose first album had tracks that sounded like a gas leak and windchimes, a step back from the grandoise orchestral sound they've come to be known in favor of the rock instrumentation that made them famous is a welcome happy medium.