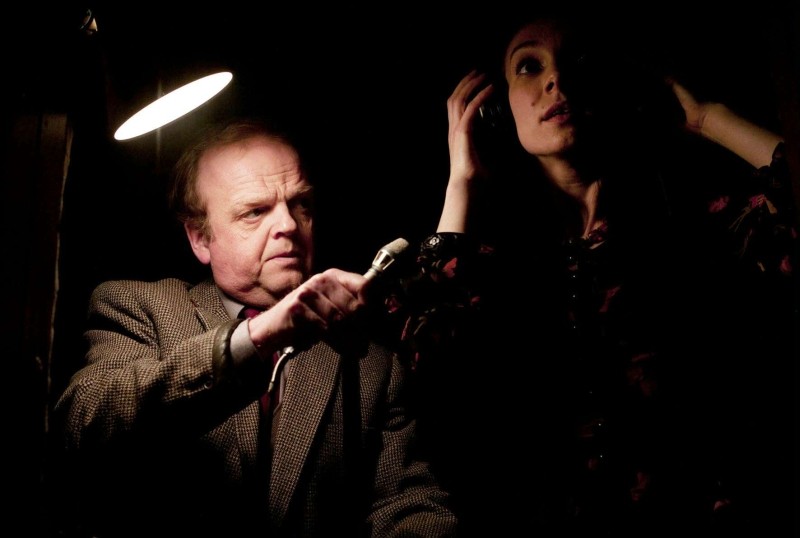 Berberian Sound Studio is a horror film where nothing horrible happens, a slasher flick without a drop of blood spilled. The wounds here are psychological, and the terror is emotional. British character actor Toby Jones stars as Gilderoy, a mild-mannered sound mixer brought in to work on a low-budget giallo film. Gilderoy is a quiet pacifist, adverse to conflict and so non-violent he will go out of his way to not kill a spider, so his work on a blood-drenched film (filled with disturbing atrocities we hear about but never see, including one involving a hot poker that, in description alone, gave me shudders). The film is a paean to sound design, which is beautifully constructed here even as the movie painstakingly details the process it is executing. If it sounds dull, it never is, and every shot is punctuated with enough style and dread that scenes of Jones turning dials are filled with as much suspense as any thriller could muster.

There are comedic elements to the film, like the fish-out-of-water soundman's efforts to get reimbursed for his flight or the film-within-the-film's director's (Antonio Mancino) horndog tendencies, but for the most part, the film is a studied depiction of a man losing sight of himself and his ideals while he becomes more and more immersed in the gore of the film he is working on. Lines between reality and fiction begin to blur as Jones finds himself crossing lines he never imagined and forces himself to become the type of angry, confrontational person that seems to excel within the studio.

The thriller aspects of the film only work so well and for so long. Eventually, audiences will figure out what the movie is up to and its tricks will lose some of their luster, but they're never really the point anyway. What Berberian Sound Studio is after is much subtler than the films it apes in style. Activists who claim violence in the media propagates violence in life might find evidence in the film, but that also misses the point. This is a celebration of technical competence and an ode to an unsung aspect of film production, but it is also a slow-burning fight for a man's soul, between polite gentility and a ferocious anger that bubbles beneath the surface, always threatening to emerge. This is a movie about the way movies can transport us to different worlds, can play with our emotions and alter our outlooks, and about the way each of those effects is accomplished through hard work and careful decision-making by a team of people who often go unknown.