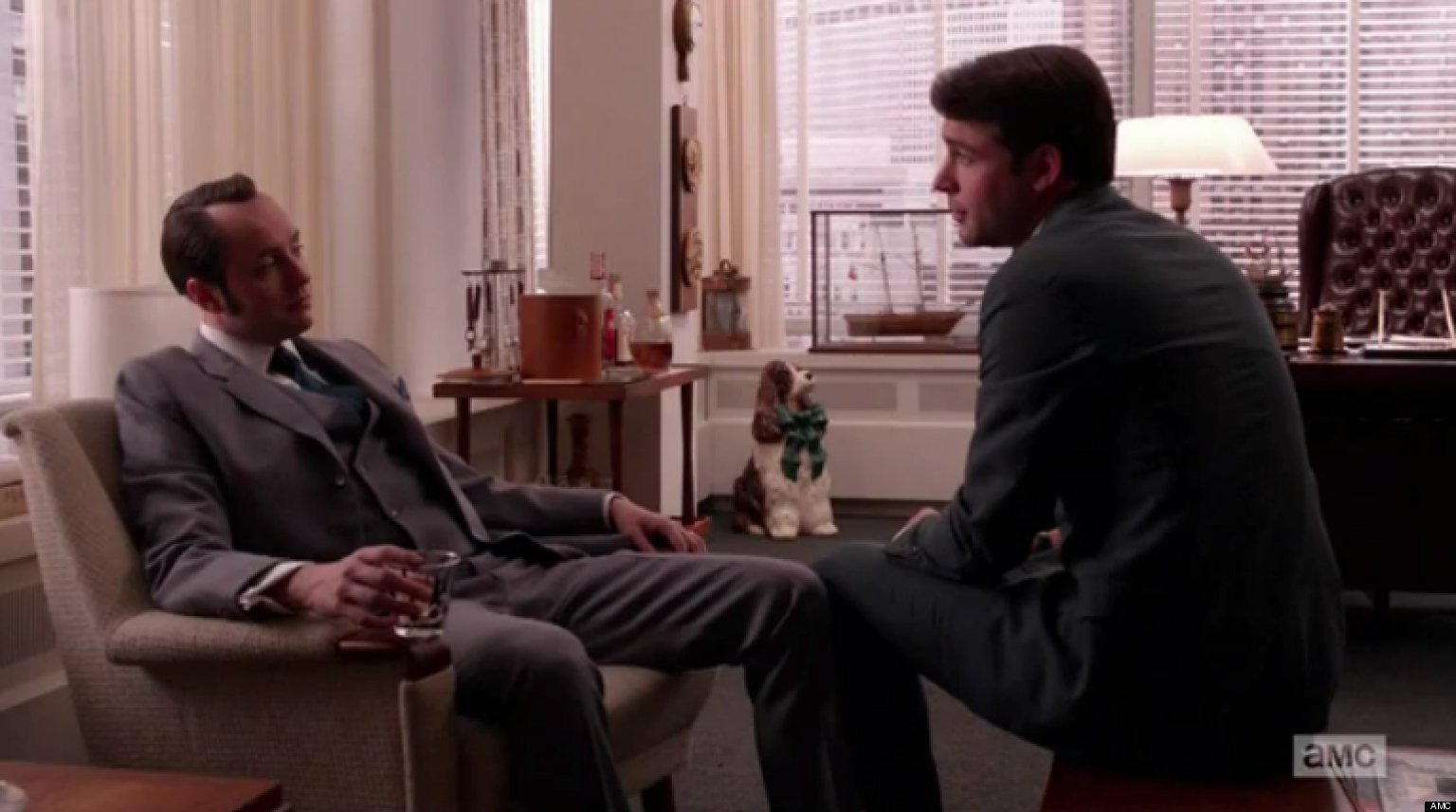 Episode titles on Mad Men tend to speak volumes about what any given installment will be exploring and how it may be addressed. In that regard, "Favors" is one of the most on-the-nose titles this show has ever utilized. This is an episode about favors of all sorts, about the people put in the uncomfortable position of asking for them, about people uncomfortable about the implications of granting them, and yes, about favors of another sort entirely. Nothing is ever given for free on Mad Men, a point made well tonight when even good-hearted, near saintly Ted expects something in return for helping Don out.

The most important favor (or series of favors, as it turns out) is the one involving Mitchell Rosen, who after protesting the draft by returning his card without filling it out, has been shifted to 1A and may be called into active duty at any time. Alfred and Sylvia are appropriately devastated, and Don sets immediately to work on freeing the kid from conscription. First, he tries to bring it up with the guys from Chevy, due to GM's huge government contracts. When that goes over like a lead balloon and nearly tanks the client dinner (turns out people don't want to discuss 'Nam when they're being wined and dined), Ted offers to do Don a favor and call a friend in the Air Force. In return, Ted expects Don to stop competing with him for business and to give up on Sunkist to allow the firm to take on Ocean Spray, which Ted, Peggy, and Pete have been courting. Its a scene played mostly for laughs, as Don is completely oblivious to Ted's anguish and thinks its an absurdly simple exchange, but it says deeper things about both men.

We know that Ted and Don have affected each other since they began working together. Don has been competing with Ted, even though this week he appears like he hasn't even noticed the competition taking place. This makes sense, as for all Don's speeches about the importance of authenticity, this is a man who hides from himself and his deeper feelings at every turn. Ted, on the other hand, is the most emotionally honest character on the show, and he has been driven insane by Don's childish games of one-upsmanship, to the point where he refuses to take anymore. Yet where Don would probably do something underhanded to get Ted out of his way (as he did earlier when he got Ted tanked), Ted goes straight to the source of the conflict, offering to help Don in exchange for a truce. Don trades in obfuscation, always talking around ideas to preserve the mystery at their core. Ted goes straight to the source. This says a lot about these men, both as advertisers and as people.

A few weeks ago, Bob Benson did Pete a favor, setting him up with a nurse for his ailing mother. Now, Pete is concerned about the sort of favors Manolo may be doing for his mother (and here, the first time the titular word becomes a double entendre) when she tells Peggy about the passionate love affair the two are having. The plotline darts back and forth between being played for comedy about old people and parents having sex and hinting at the deeper discomfort Pete has with the idea that his mother is possibly being taken advantage of. When he calls Bob in to yell at him about Manolo, Bob is is average collected self. He first points out that Pete's mother is not in her right mind. Next, he indicates Manolo wouldn't be interested in her anyway. Finally, he seems to want a favor of sorts from Pete, touching his knee and saying "When there's true love, it doesn't matter who it is."

This scene can be read in many ways, and adds to the ongoing mystery that is Bob Benson more than it provides any answers. Yes, its possible, and I'd say even likely at this point, that Bob is gay and that's all there is to it. This has always seemed to make sense (he and Joan have an ease together that fits this idea), but also doesn't fit entirely with this scene and with the way Bob interacts with everyone around him. The story he tells for how Pete's mother may have fallen in love with Manolo (he argues that when someone dotes on you and takes care of your every need, feelings may develop) doesn't just fit the way Bob has approached Pete. Sure, Bob got Pete a nurse, but this isn't really the sort of thing he's talking about, or at least, it's not enough. Rather, to my ears, this sounds like Bob explaining his efforts to make all of SC&P fall in love with him. This contributes to my ongoing theory of Bob as a neo-Don Draper, a corporate cipher who will become whoever he needs to in order to get what he wants. Could Bob be gay? Sure. But that doesn't foreclose the possibility there's more going on with him than just some closeted desires. If that is all that comes of the mystery of Bob Benson, that's fine with me, but I would not be surprised if there was more to it.

Sally's friend Julie does her a favor as well, and it goes about as well as anything in the life of poor, poor Sally Draper. Julie slips a note under the Rosen's door, making reference to Mitchell's "cute ass" and signing it in Sally's name. Sally goes to retrieve it, and what results is an echo of last season's masterful "At The Codfish Ball," where Sally happens upon something very adult and is forced to confront the filthiness of maturity in ways she may not be totally prepared for. The show does an excellent job with Sally, placing her right on the cusp between childhood and adulthood, and thus making her deeply susceptible to the traumas of being thrust forward too quickly. She sees something she shouldn't, and suddenly, resonance compounds resonance. This sequence seems to reference not only "At The Codfish Ball," but the flashback earlier this season when a young Dick Whitman watched his mother through a keyhole. Where li'l Dick was perversely fascinated by what he found, Sally is simply horrified.

Kiernan Shipka is unsurprisingly fantastic in the scene. Don is her hero, the parent she looks up to and adores. She and Betty are in a near constant war, but her father supports her and loves her, and it destroys her to see him compromised in that way. And so Julie's favor and Don's favor converge into something horrible, through the naivety of the former and the selfishness of the latter.

Its unclear whether Don does everything he does tonight in hopes of winning Sylvia back or just out of a desire to save Mitchell from the fate he imagined befell the PFC he met in the premiere in his near death experience just last week. Its possible Don is being charitable, but knowing him as well as we do, its kind of hard to believe his desire for Sylvia didn't color some of his actions. Even if Don was simply trying to be a good guy (and it does seem he tried to reach Arnold at his office before calling the apartment and getting Sylvia), its almost impossible that he wasn't also thinking about how grateful Sylvia would be for his help. It colors even his best moments this evening with slightly sickening motives, which makes this a Don Draper story in season six. No one does a favor without expecting something in return, it seems, and what Don wants may just tear apart two families and multiple lives.

All of this comes to a head in the episode's closing moments, as Don comes home drunk after drowning his Sally-sorrows to find his daughter and his wife waiting for him. Sally's disappointment colors the scene from the start, and Don just wants to lie down and get away from it all (this is, after all, Don Draper, a man who runs from his problems until they disappear from his rear view mirror and then pretends as hard as he can they never happened at all). But then Albert and Mitchell come up to thank him, and the scene becomes unbearable to watch. Sally knows her father has hurt these people, and Don knows that Sally knows. He is barely able to keep it together and play the better man, shaking Mitchell's hand but looking sick and heartbroken in the process. And when the Rosens leave, Sally explodes in disgust at the man who was her savior. Sally slams her door on Don, but she can't keep him out, not the way she wants to. She can no longer envision her father as the paragon of perfection she did before. She closed the door on adulthood and retreated into her room, but Don's voice still wafts in, as if to remind her she can't escape aging. She, too, will be compromised by time. She agrees when Don tells her "it's complicated," because there's nothing else to do. Sally has stepped into adulthood once again and found it wanting. Then, much like his daughter before him, Don closes his door, hoping in vain to keep out his demons just a little longer. But we've just seen how effective this is, and we know the past is never as far behind as Don would like.

-"Like everything else in this country, Diplomacy Club is just another excuse to make out."

-"He can't spend the rest of his life on the run."

-"This is the agency I've always wanted. Ambition, brains, and beauty." "Yeah, but what about him?"

-"At least one of us ended up important. Please tell me you don't pity me." "I don't." "Because you really know me."

-"Don't you think I'm entitled to the pleasures of love?" "Do not be more specific."

-"Well, I bet you don't have a lot of friends, Don, so I'm going to assume this is important."

-"When there's true love, it doesn't matter who it is."

-Drink every time a Mad Men episode ends on a closing door.

-On the next Mad Men: Pete kills EVERYONE!
Tags: Mad Men
comments powered by Disqus