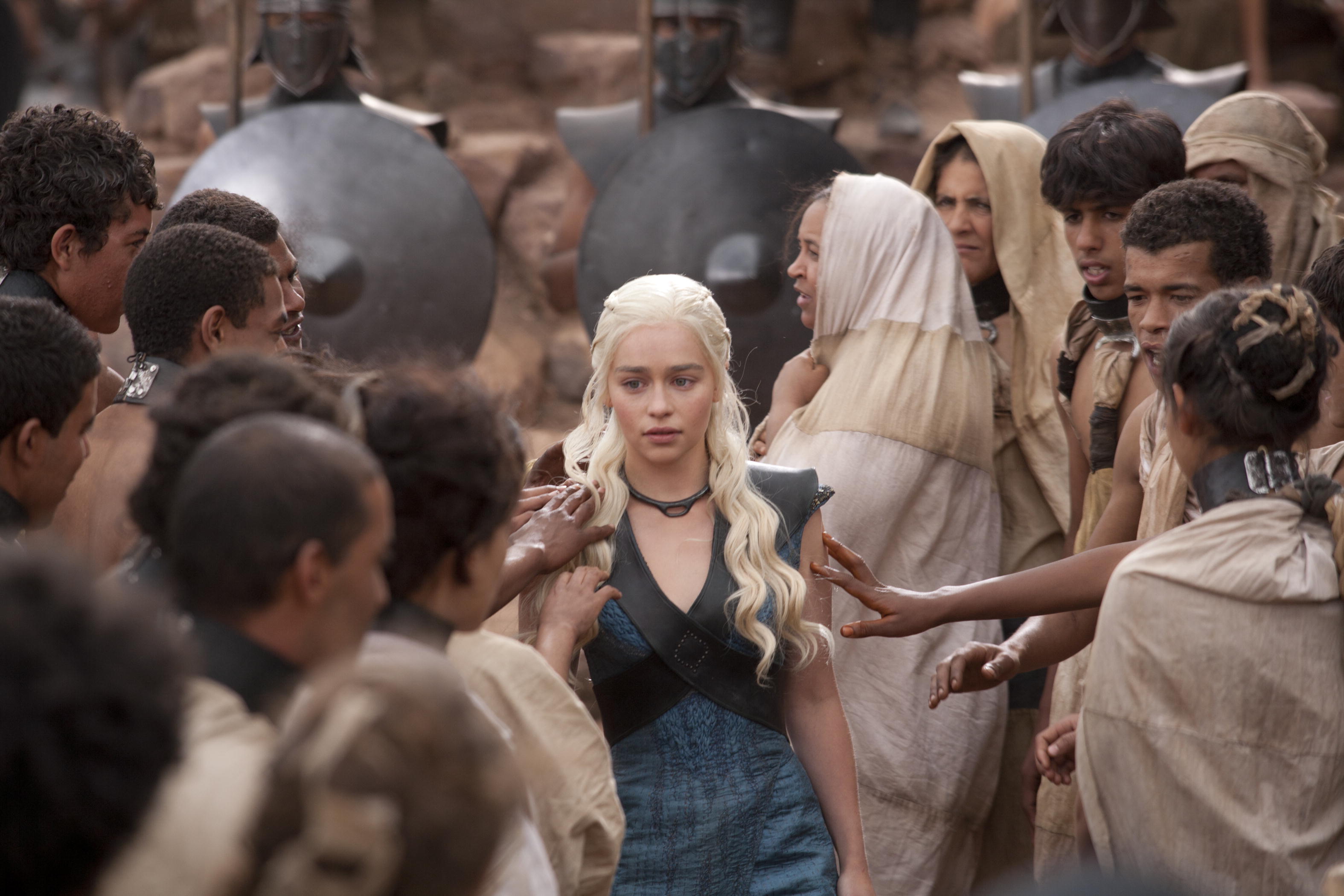 The season finale of Game of Thrones doesn't disappoint. It's an extra long episode with a lot of little touches, so forgive me if I have a lot of stray observations about it.

I was a little disappointed in the Red Wedding inside the Twins, but the episode opens with what it looks like outside, which is much more what I had in mind. Cutting off the heads and putting Grey Wind's on Robb's body was particularly brutal, especially for Arya to see. More in this episode that illustrates her growing bloodlust. How easily she goes from playing the child begging for food to bloodthirsty killer is chilling. I'm in continual disbelief at how good an actor Maisie Williams is at such a young age.

I love intersecting storylines, but the whole scene where Sam and Gilly meet Bran & Co. just felt really awkward and rushed. Sam barely finishes climbing out of the well before he says, "Hey I can tell that you are Bran and I promise to do whatever I can to help you." What I did love, however, was when Sam and Gilly get back to Castle Black. Aemon, the 103-year-old Targaryen maester, is the best, and he's never wasted in a scene. Bran's scenes themselves didn't do too much for me, but I did like the story of the Rat Cook. He shares some Westerosi lore, while explaining why it was so grievous a sin for the Freys to slay their guests at dinner. That pie thing is pretty crazy too.

As always, scenes between the Lannister family are just golden. I know I've said it before, but the best scenes always seem to come when they stick pretty closely to the book, particularly when they keep great lines in there. Tywin proves for good and all that he is the one in charge (and says as much to Tyrion). Even oblivious Joffrey notices that the temperature in the room drops fifteen degrees when he mouths off to Tywin. (Notice Varys's visible wince when Joffrey yells that he is the king.)

The big mystery that we were all wondering about and definitely couldn't have predicted has been solved. Theon's captor is actually Ramsay Snow, Roose Bolton's bastard son. Theon seems pretty thoroughly broken, and I'll be very interested to see how Alfie Allen plays him going forward. The one thing that bugged me though was, like with Sam and Bran, how rushed it felt. Ramsay cuts Theon's business off, and Theon still isn't completely broken. He refuses to all himself Reek. Ramsay slaps him in the face, though, and suddenly Theon is a sniveling mess.

Like Aemon, it seems Balon and Yara are back to preface next season. Ramsay has also sent a package to Lord Balon Greyjoy. He doesn't seem to feel for his son, but as Asha/Yara stares at him, we see that he's more disturbed than he lets on. For most of the scene Yara is silent, just letting Balon think and be ashamed by what he's saying, until she calls him out on being a bad father. "He's your son. He's your son. He's my brother. He's a Greyjoy." I'm not a big Asha fan, and even less so Yara, who lacks what little charisma her character has in the books, but it was a little heartwarming to see her set out to rescue little baby Theon.

Stannis sounded like a king for the first time when he spoke about how he wouldn't forgive those who made the realm bleed. For someone who stomps around yelling about honor and rights, up to this point he hasn't acted very kingly. However, I feel like nothing he does is strictly honorable or just for the good of others. Even in deciding to go help the Night's Watch, it's like he realized he's lost the war in the south, so maybe if he plays the hero in the north, he can win the remains of Robb Stark's supporters to his cause. Then again, I suppose in a medieval setting such as this the person who can best protect you is actually a pretty solid method for deciding on a king.

I'm really not buying Melisandre this season, either. She reminds me of Dumbledore. In the books he was always cool and in control, even when he was working hard and going nuts, it never showed. Then in the movies, he was a jabbering madman I wouldn't leave my kids alone with. Melisandre is weirdly excitable for someone who supposedly sees most things before they happen. And what's with saying they need to win the war, but she reads a letter and suddenly changes her tune, says they need to go to the wall?

I feel at times like the producers just want Daenerys to have all the big cool scenes, and save her for the end of episodes. To be fair, she is a very key player in the big picture of the story. I just worry that with so little screen time, she's becoming a two-dimensional conqueror, whereas in the first thirteen or so episodes of the show we got the picture that she's actually a scared teenager with far too many worries and responsibilities for someone so young.

In any case, I was a little conflicted at first about the choice for the final scene of the season. The first season ended with the birth of Daenerys's dragons (fire). The second season ended with brothers of the Night's Watch being pursued by the White Walkers (ice). (Get it? The book series is called A Song of Ice and Fire.) I didn't know what I should expect this season. She just gets lifted up by the people of Yunkai (in a way that funnily enough parallels how the brothers lifted up Jon a few scenes earlier) and chant "Mhysa," which means "mother" in Old Ghiscari. Then there's a cheesy camera movement upward with the dragons flying around, and the screen goes black. In the moment, though, it works. It really paints Dany in a messianic light, as she seems to be for so many.

The Dothraki who remain from Khal Drogo's Khalasar want to survive, maybe even be restored to their former glory. The people she liberates from each city in Slaver's Bay have by and large never known freedom, and they look to Daenerys to show them what to do with their lives now. Ser Jorah wants a real love in his life, to feel that his heart hasn't been completely wasted, as well as to restore his honor as heir to a great house of Westeros. Ser Barristan feels that kneeling to Robert Baratheon after the rebellion was a great disgrace in an otherwise exceptionally honorable life, and the old knight wants to regain his self-respect before he dies, by serving his former prince's little sister. It's been an understated theme for the past three seasons, and I'm very much looking forward to seeing how Dany reacts to it. For her part, she seems to be equal parts happy and terrified to be adored by the masses. It must be breaking her heart to have so many call her mother, when she knows that she'll never bear actual children. It's not as exciting as the last two season finales, but it's very meaningful, and telling of her story arc.

The only real negative feeling I have after watching the episode is knowing that it will be nine months before next season. The producers have said that the Red Wedding (which was a bit of a letdown, to be honest) was the thing they were looking forward to making most, but not for me. They've burned through a good three quarters of A Storm of Swords, but I feel like most of the good stuff is in the last third of the book. Next season should be even better.

-I like Tyrion and Sansa getting along. It wasn't in the books much, which was both something I wanted to see, but also a great example of people just not getting each other in the story.

- Varys and Shae have a larger part in the story than in the books, and I love it. Shae looks out for Sansa, and Varys looks out for Tyrion, like a big behind-the-scenes brother and sister.

-So many great Lannister lines:
"Oh, I'm a monster. Perhaps you should speak to me more softly then."
"Any man who must say "˜I am the king' is no true king."
"WAH I'M NOT TIRED IOWANNA GO TO BED." (paraphrased)
"Explain to me why it is more noble to kill 10,000 men in battle than a dozen at dinner."

-[Puts down invitation] "Well, your father's not going to go to that." Davos the sassy secretary.

-It wasn't much, but I thought Davos's scenes with the younger characters were good. He's such a good father figure, it makes it even sadder that he lost his son.

-I forget if it was mentioned in the books or not, but Stannis equating Melisandre with Aegon's three dragons seems like a very Stannis thing to do.

-The directors' favorite trick of putting two arguing characters over and behind the shoulders of a deciding character makes another appearance in Stannis's scene. Getting a bit stale.

-The show is falling into the unfortunate habit of having a whole bunch of scenes between two or three people, then once every few episodes a big scene with a lot of people, and it's getting old as well. Maybe it's the unavoidable consequence of such a large-scale show.

-I wish I had more to say about the Jon and Ygritte scene. It was sad.

-Cersei is always in long-sleeved gowns that cover most of her skin. I think it's both to cover up Lena Headey's tattoos and to show how guarded Cersei is thematically. Note how in the scene she sees Jaime come back, her shirt has no sleeves.

-I'm glad they didn't do too much with Jaime. His homecoming needs time and is better put off to next season.

-Ramin Djawadi gives us a great score in every episode, but it seems like he saves just a little extra to give us a really amazing closing scene every season.