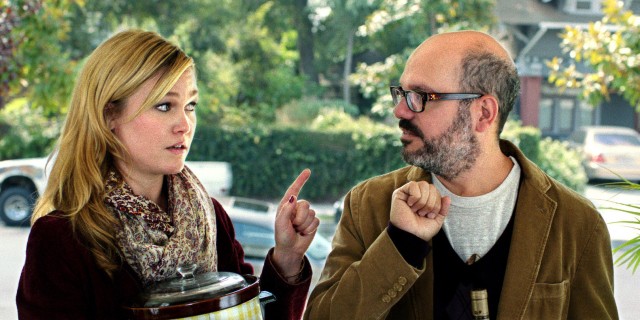 It's A Disaster isn't the first film with its basic premise. In fact, the "apocalyptic comedy" is basically a subgenre at this point, with its own tropes to fall back on. In fits and starts, though, It's A Disaster is among the best of them--a funny, sharp, bleak and emotionally raw film about the way social graces break down in the face of certain death.

The film is populated by stock-types, but each is played so well, they (almost) bring the cliches to life. David Cross stars as Glen the outsider in a group of friends gathering for a couples' brunch. He is the new boyfriend of Tracy (Julia Stiles), an up-tight first responder who has been unlucky in love. The cast is filled out by a hippie couple (Rachel Boston and Kevin Brennan), a science teacher who immediately flips (America Ferrera), her paranoid fiance (Jeff Grace), and the hosts (Erinn Hayes and Blaise Miller), a couple about to announce their divorce. Hayes especially is to be commended--she's stuck playing the tightly-wound, shrewish type of woman who only exists in movies to harangue a "cool dude," but she fills her character with a believable drive and a deep dissatisfaction, to the point where, while I still doubt this type of person actually exists, I felt for her. Cross is also excellent, in ace straight man form as a kind man perpetually finding himself in the wrong situation.

The movie is not quite as clever as it thinks (though it is fairly clever at times), and tries to throw one too many twists into the proceedings, leading to a revelation in the film's final act that threatens to derail the whole thing and dials back a lot of my affection for the film. Things don't go off the rails entirely even then, but It's A Disaster did lose me a bit in its final moments. By that point, though, I had built up enough affection for the characters that the film couldn't erase that good will entirely. Filled with hilarious one-liners, deft character development, and a willingness to embrace the darkness, It's A Disaster is a fine, if flawed, look into the abyss.