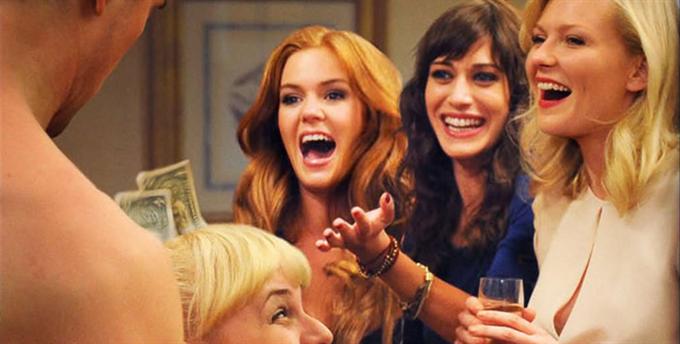 This film was sold as a cruder, more caustic version of Bridesmaids, and to a certain extent, that's pretty dead on. Sometimes this works to the film's advantage, but often it feels like smut for smut's sake, more interested in ensuring sexual content than in finding jokes to go along with it. It is also hard to get into the world of the movie, as every character begins as fairly reprehensible in a one-note sort of way: Kirsten Dunst is the uptight Maid of Honor, Lizzie Caplan the stoned slacker, Isla Fisher the party girl and Rebel Wilson the somewhat demanding bride.

Fortunately, each of the female characters are developed over the course of the film to become more understandable, sympathetic, and even relatable. This does blunt the film's caustic tone, leading to some shifts that are not as fluid as the film seems to think (if you watched the first five minutes of the movie and the last five, it wouldn't be hard to think they were two completely different movies sharing an eerily similar cast, so large is the film's tonal shift over its runtime). Unfortunately, all of the men in the film remain one-note and one-dimensional. They all exist on the spectrum from chivalrous to skeezy, and don't really shift out of their default zone. This is a little bit refreshing, actually, seeing as the one-dimensional constructs here are gender-flipped, but bad characterization is bad characterization regardless of what's going on below the belt, and the lack of fully fleshed male characters somewhat harms the film's closing sequence (though it is elevated slightly purely through the force of Adam Scott and Lizzie Caplan's chemistry). Overall, Bachelorette is fine. It isn't as dark or as heartwarming as it thinks it is (and somewhat perplexingly, it tries really hard to be both without fully grasping how the two would relate to each other), and all of the characters could have used a bit more room to grow, but what starts as a movie obsessed with how dirty and edgy it can be grows into an interesting examination of female friendship and coming of age.