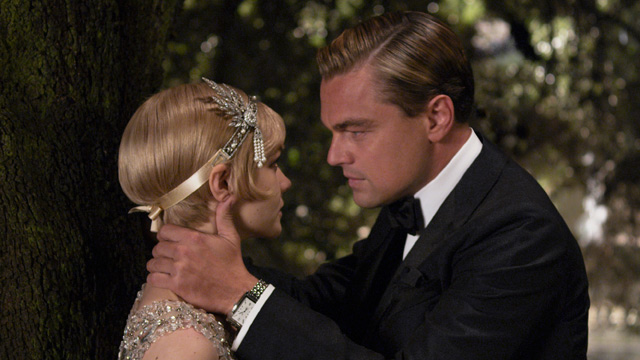 The Great Gatsby, directed by Baz Lurhmann, opened last weekend. It's gotten a lot of hype, and has a pretty impressive cast, but the way the release was set (December 2012), then pushed way back (July 2013), then brought back just a little bit (May 2013) made me wonder if it was a bust that was waiting to be dumped in the spring months. Going in, I didn't really know what to expect.

I can't say I've ever been a fan of movies by Baz Lurhmann (not to be confused with Lrrr of the planet Omicron Persei VIII), and I think it's just that they're too glitzy for my disposition. Romeo + Juliet was good enough, as far as modernized adaptations of Shakespeare go, and Moulin Rouge I enjoyed about as much as I can enjoy a lovey dovey movie musical. In both movies, though, there were bizarre manic trippy sequences I found off putting and unpleasant, in a way I would only learn years later is the same feeling you get when you wake up hung over and turn the TV on, and are assaulted with a loud, grating children's cartoon.

It does look like Baz Lurhmann has learned to temper these scenes. Each time there was garish partying going on on the screen and I felt that familiar sick feeling coming on, I saw that this time around he had the budget to make everything look pretty and attractive, in that strange way that you get when you throw millions of dollars at a production. Actually, I thought these scenes captured the feverish essence of the novel very well. The only other screen production I've seen is the 1974 film starring Robert Redford. I'm not saying it was a bad film, but the party scenes at Gatsby's felt like particularly raucous weekend parties, not the mind melting blowouts that left addled guests staying at the mansion for weeks on end.

I want to like Toby Maguire, I really do, but I feel like he's just this very nice boy with no range, and when he does emote beyond his simple little smile, it feels forced and unnatural.

To me, Carey Mulligan can do no wrong. She has this sort of tragic look on her face, like she knows something, some big sad secret that she'll never share, a sadness so profound that the mere attempt describe it would diminish it. But it's all there on her face. Playing a character like Daisy Buchanan, who is very easy to lump into the category of stupid selfish women (or what Stephen Colbert called it when discussing this movie, "Bitches be crazy"), is difficult. I can't think of many actresses who would understand Daisy enough to show her in a sympathetic light, let alone add such a depth to the character that was always sort of implied, but was never really there before.

Leonardo DiCaprio likewise captures a deranged side of Gatsby's affections (if perhaps taking it a little too far). While I can't give him points for subtlety, I have to hand it to him for not taking the easy way out of being the misguided fool who wastes his life chasing something that doesn't exist anymore. Not that that would be a bad thing: it's drawn fans of the story for almost a century. But DiCaprio doesn't just play the earnest gentleman. His Gatsby is a man who has spent so long pretending to be someone else that he starts to come apart at the seams when he has nothing to fall back on. While it's a little discomfiting, as this is a less charismatic Gatsby than I was used to seeing, it worked in the larger theme of the movie, that all of the glamor really is just a glamor.

I don't have too much to say about Joel Edgerton, other than that he plays a great Tom Buchanan.

I was worried when I first looked at the soundtrack listing. It's a story that takes place in the early days of jazz, and that's the only music I could imagine in it. However, once you're sitting in the theater, the modern soundtrack does sort of work, and it's really more of background music to add style to scenes. Inside the story, jazz is still omnipresent.

All in all, the movie was about what I expected it to be. I expected a big, extravagant spectacle, and that is mostly what it is. What I most took away from it was A) The beautiful sets and scenery that mark the first time Gatsby has been made in the age of huge budgets and special effects, and B) The disquieting, deconstructive nature with which the narrative highlights Jay Gatsby's obsessive mania, instead of just his ambition and dedication.

-I understand the need for the framing story in which Nick Carraway is in an institution, but I didn't really care for the silly editing trick of putting key passages from the book up on the screen as he's typing it.
-The decision to mention Daisy's and Tom's daughter but never show her was a clever choice, since she's largely immaterial except to illustrate how little they care about her.
-I'm not sure why the scene where Gatsby's throwing all of his shirts at Daisy is so crucial that it's in every adaptation (from the novel to each and every movie to the nostalgic pseudo-retro Gatsby game made in 2011), but I never don't enjoy it.