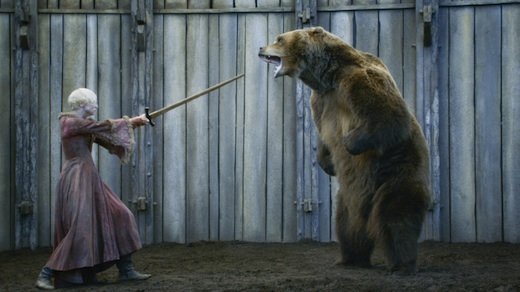 I was expecting just a bit more action in the episode, but I was by no means disappointed. There was a lot going on in the plot, and a little more of last week's deal of moving pieces around for future events. Author George R.R. Martin writes one episode per season, and this season it was "The Bear and the Maiden Fair."

Sansa spends a lot of time getting excited, then devastatingly crushed, then retreats into herself for a few episodes while she tries to just survive. Lather, rinse, repeat. It was refreshing to see her talking to Margaery openly, acknowledging that she is in fact a child and she just can't keep up with all of the machinations and backstabbing going on around her. She's also adorably ignorant of sex, to Margaery's amusement. Margaery, meanwhile, is turning out to be quite the big sister. Most people say that it's all part of her manipulation, and I know that she is pretty underhanded, but I also get the feeling that she does care for little Sansa, with her adorable idealistic naÃ¯vetÃ©.

Arya gets real tired of the Brotherhood's shit this week, and strikes out on her own. And is immediately captured by Sandor Clegane, who's evidently been creeping around looking for an opportunity to get his gold back. Not much else of note happens, except to reinforce Arya's trend of hating everyone who crosses her even a little bit and wishing death on them, and finding a new grizzled-male-role-model captor.

I can't even follow Robb and Talisa anymore, or tell how I'm supposed to read the scenes. She could be, might be pregnant. They had a kind of cute scene, and I'm very hesitant to compliment anything or anyone in that storyline. The weird gratuitous shots of Talisa's ass seemed excessive, but I'm going to chalk that up to George being mischievous, both poking fun at the camera's affinity for butts and keeping in line with the unabashed reality of the show, rather than a pervy cameraman. There's a lot of hubbub about who she's writing letters to, but I'm just not feeling it. With a show like this, you hear a lot of conspiracies. I'm not counting anything out, but I'm also not imagining elaborate schemes.

Jon and Ygritte are as adorable as ever. I watched the show when it re-aired at 11, and the hour in between when it originally aired and when I saw it, there were a lot of posts online about how much Jon time there was, but I didn't feel like much too much happened. I do like that Tormund is a more lighthearted character than at first, and though I'm not sure what to think about Orell and Ygritte, at least now he has more dimension than not liking Jon for the simple reason that Jon always needs to be with an antagonist (what's that about, anyway?).

I know I haven't had much good to say about Bran's storyline, but really I haven't particularly enjoyed any of his scenes. I found Osha's story about her boyfriend becoming a wight more tiresome than anything. The show has little enough time to get through the plot without pausing every ten minutes to review what we've already seen. I never liked Jojen much in the books, but he really comes across as a prick in the TV series. Meera I do like, but the actress playing her is pretty bland. Always love Hodor, though.

I have mixed feelings about Jaime and Brienne this episode, though I'm not sure if that's fair. Jaime chapters in the book are ones that make you want to go back and reread your favorite parts several times, which may be why no matter what they do on the show I feel underwhelmed, so I'm going to put my feelings aside and comment on how well it was executed. Jaime and Brienne have this great relationship that's been developing since last season, which is only augmented by the fact that it's really not romantic. They are two warriors from different generations who have led very different lives, and yet they've come to depend on each other. The bear scene itself was well done, where Jaime gets to look sort of heroic for once, without going over the top and having him slay the bear singlehandedly.
Much like Loras's and Renly's predilections, they're being much more up front about Theon's eunuchization than in the novels, where it's never said, but something you sort of pick up on after a while. It was a strange scene, but I actually didn't have a problem with it. I've accepted that a story is being invented for Theon, because the logistics of a television series demand it. It helps that I feel like it's impossible to butcher the story when the scene written by the author of the novels, who knows Theon better than anyone.

Tywin and Joffrey really don't interact much directly. In fact, the only scene they had together before tonight was immediately following the battle of the Blackwater. It was curious to see how Tywin, unstoppable force, reins in Joffrey, immovable object. He does it by pretending Joffrey is in fact in control, that the things going on without him are beneath him rather than behind his back. I recently heard someone say that when trying to get petulant toddlers to do something, you shouldn't tell them, for example, to put their pajamas on, but rather ask them if they want to wear their red pajamas or their blue pajamas. Tywin is every bit as conniving as his daughter, and possesses all the subtlety that she lacks. It also helps that, not entirely unlike Grand Maester Pycelle, Tywin plays the part of the grandfather just a little bit. With Cersei or Tyrion, he's just his authoritative self. With Joffrey, however, he knows he won't get the best results by barging in and trying to order the king around. A great example of both Charles Dance's and Jack Gleeson's acting.

I was a big fan of the scene between Tyrion and Bronn. Tyrion's a complex character who runs deep, maybe more so than anyone else in the show. Tyrion's most human moments seem to come when he's not dealing with his own family. Besides the occasional scene with Shae, we haven't seen his sympathetic side since he spent some time with Jon Snow first season. It's not unfair to call him a drunken lecher, but when faced with the prospect of being forced to marry Sansa, he cares more about how it's further torment for her than the fact that he's being forced into it. Also, and I'm not sure if this was the writing or the direction or the acting or what, but he was speaking in a strange, plaintive tone. I expected him to at least bristle when Bronn brought up Tysha and how disastrous their marriage turned out, but instead Tyrion just looked like the whole thing made him sad.

Today seemed to be an episode for characters speaking in new tones. Emilia Clarke plays sad Daenerys very well. She plays Daenerys the ruler passably well. I never really buy angry Daenerys, but it's not the worst thing in the show. Smirking Daenerys is new. The first time Dany had a big win, after the dragons were born, she celebrated by wandering the barren desert and starving. The second time, after she sailed away from Qarth, she still had no army, but the whole situation seemed more optimistic. This time, after winning the Unsullied to her side, she's confident enough to negotiate politically, and even be a little playful. It was a weird new thing to see on the screen, but like the previous Tyrion scene, it just felt right. Honestly, I was getting a little sick of her being alternately desperate and furious.

George just gets it. He gets people, and knows how characters should talk to each other, what they should say, how they should act. Furthermore, anytime George writes an episode it's as good as canon as far as I'm concerned. Sometimes there will be a divergence from the novels, and I'll think they may be getting off topic or doing disservice to the story. When George does it, I know he has the big picture of both book and TV show in mind, and it's not possible for a character to do or say something the book character wouldn't, because it's coming from the same source.

-It would be easy to slip into the pitfall that all the eastern slave masters are belligerent and/or stupid and/or crass. I'm glad to see the ambassador from the Yunkai'i had a completely different personality from Kraznys in Astapor, while being no less antagonistic.

-"If we die, we'll die. But first, we'll live." An unnecessary paraphrasing of an iconic line from the novel, but I'll take it.

-Jaime used his position as Tywin's son again to intimidate someone into cooperation. I dunno if this was sloppy after all the lessons he's learned about that this week, or if there's a purpose for it in some other way.

-I love seeing Jaime do cool stuff on screen, but I worry that Brienne has just become someone for him to act off of. I think we'll be getting a bit more of her in the future, though.

-How about Rickon? Why is a Stark getting less screen time than expensive CGI animals?\t

-Shae calling back to the first season, where she called herself "Shae the funny whore."