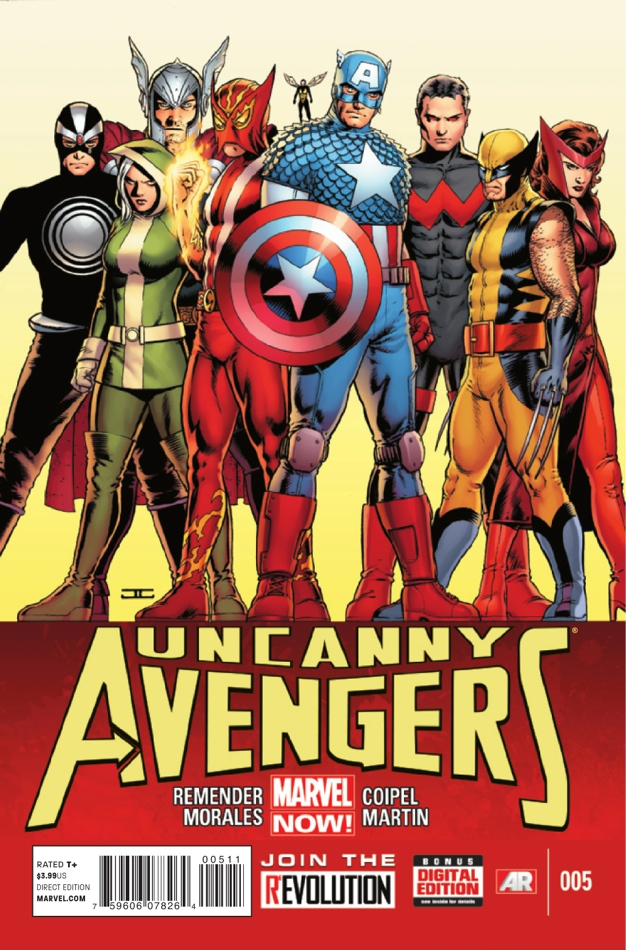 After a first arc that stumbled in the third and fourth installments, Rick Remender delivers an issue that clearly and concisely sums up the exciting potential of an Avengers/X-Men hybrid team book. Finally having time to take a breath following the Red Skull's assault on New York last issue, the team moves into their new headquarters, recruits some new members, and plans on how best to tackle the issues facing the mutant community.

The slower paced issue gives Remender a chance to start fleshing out the character dynamics that seemed overly simplistic or lost in the shuffle during the action packed opening arc. Already Havoc is growing into a much more interesting character under his watch, while natural leaders Captain America and Wolverine chaffe uncomfortably in the position of having to take orders for a change. Remender has assembled a cast of fan favorite characters and it is clear from each of their small scenes in this issue that he has an arc in mind for each of them. I'm especially interested in his plans for Wonder Man whose new found pacifism doesn't exactly mesh well with a super hero combat team.

The amount of seeds Remender plants in this issue shows that he clearly has long term plans for this book and that if executed with the skill he displayed on Uncanny X-Force could be a tour de force for hardcore Marvel fans. However I'm still not crazy about the old school, third person narration Remender employs during the fight scenes as it tends to soak otherwise well thought out action beats in unnecessary amounts of melodrama.

Olvier Coipel delivers solid pages, and while I don't always agree with his layout compositions I always appreciate his attention to different body types and posture in his figure work. The fight scenes are a little confusing at times, I found the positioning of characters almost impossible to follow. However Coipel was able to infuse the individual character interactions with a wide array of emotive expressions, which represented the bulk of the issue, so overall the art was imperfect rather than being an outright weakness for the issue as a whole.

Uncanny Avengers #5 ends on a shocking cliffhanger that looks like it could derail the team's mission just as it has begun. While the first arc wasn't the strongest debut for Remender's high profile new book, this issue has successfully reignited my excitement for the potential of this concept. I only hope Remender is able to deliver on the promises he teases in this issue.