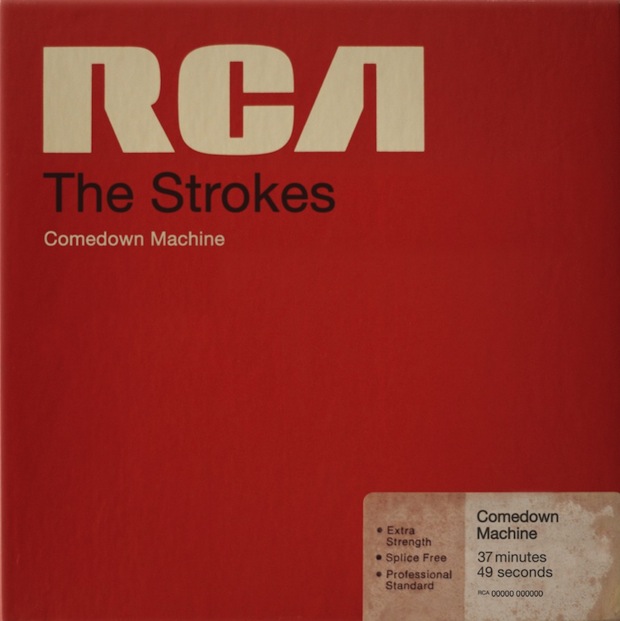 Bottom Line: Despite some successful attempts at reaching out, Comedown Machine again shows that The Strokes are at their best using their tried and true styles.

In the 12 years The Strokes have been around, they've managed to find a place for themselves beyond the garage rock revival of the mid-2000s when bands starting with "The" seemed to be popping up every week. Their debut album Is This It? and their 2003 follow-up Room On Fire were fairly comparable; both albums had a strong retro sound reminiscent of 1970s rock (with the occasional 1980s new wave influence), with simple, repetitive riffs and the occasional lavish solo. Just as distinguishable, singer Julian Casablancas' "fuzzy" voice (and singing really close to the microphone) became a trademark of the band. Their third album First Impressions of Earth reached out in some new directions to have a more "modern" indie rock sound, but many tracks still had the same Strokes sound we grew to know and love. Five years later we had Angles, which featured some classic Strokes tracks but quite a number of flops where all I could think is "come on Strokes, you're better than this!"

Well, kind of. On Comedown Machine, yes, there are tracks with the classic 1970s Strokes sound. Yes, they are probably the best tracks on the album. "All The Time," has all of the characteristics of a great Strokes song (distorted riffs, a solo, and Casablancas' incomprehensible lo-fi vocals) to the point that it could fit in well on any Strokes album. If this song were played in a store, anyone that had heard a song off their first two albums would go "Oh, it's the Strokes!" The track "80s Comedown Machine" also fits this bill. As I have said before, the Strokes developed a trademark sound and style early on in their career that fans grew to love. Like all bands that do this, knee-jerk rejections of anything new are to be expected, and I'm sure many fans were already pining for a return to their "early" sound when Room on Fire came out. These tracks will sate those listeners, but you may want to turn back now if you expected a whole album like this.

For the more welcoming listeners, there are some good tracks that would have been at home on later Strokes releases. Opener "Tap Out," though somewhat too muted, is saved by its guitar part, and "Welcome to Japan" and "Happy Ending" sound like they could have been some of the better tracks on Angles. Aside from continuations of the band's previous releases, three of the band members (singer Julian Casablancas, guitarist Albert Hammond Jr., and bassist Nikolai Fraiture) had solo projects that rode the coattails of the Strokes' success. Expectedly, Comedown Machine is most influenced by Casablancas' solo album, him being their primary songwriter and all, and tracks like the energetic "Partners In Crime" and synth-driven "One Way Trigger" really sound like his solo work.

Then there are the tracks that reach out in all new ways and mostly"¦don't work that well on the album. For some reason, Casablancas really upped the falsetto on the album, which works at some points (the climactic chorus of "One Way Trigger") but really should have been used more sparingly. The track "Chances," while not that bad, sounds more like a Temper Trap song in many places, and the closer "Call It Fate Call It Karma" is a highly-muted number that sounds like a cross between Sigur Ros and an old-style dance ballad. The Strokes also show that they should stay away from anything relatively slow, as tracks like "50/50" reminds me of what I disliked about Angles. The album is also plagued by Casablancas really restraining his vocal talents on most tracks, and his hushed singing on many tracks (see "Slow Animals") really holds the album back. Yes, I know that the "muted" sound is a hallmark of most of The Strokes' songs and that Casablancas sounds/looks tranquilized at times, but a lot of the songs on this album feel"¦well too muted. While there is a flare of energy on "80s Comedown Machine," the album really could do with another moment like the chorus of past single "Juicebox."

Comedown Machine seems like it may be a very divisive record, with older fans hoping it a misstep and newer fans embracing the new directions. However, I feel compromise is possible, and that the album itself is half-good with some real good choice cut tracks. Putting aside that my favorites on the album are the more 70s garage tracks, I did grow to like the tracks that sounded like (Casablancas') solo work or one of the better tracks from First Impressions of Earth or Angles. Still, much like after listening to Angles on repeat in 2011, I am left thinking "come on Strokes, pull it together!" and thinking that the band is holding themselves back a bit. Hopefully these recent albums have been learning experiences, and The Strokes will up the energy and tone down the falsetto in the future.