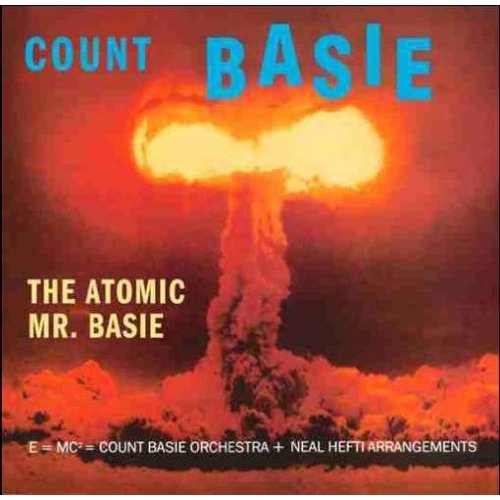 "It took Basie's core audience and a lot of other people by surprise, as a bold, forward-looking statement within the context of a big band recording."-Bruce Eder, on The Atomic Mr. Basie

Every week when I sit down to write the newest installment of this feature, I think about two things. First, I consider the connective tissue of the albums I have been listening to all week, trying to find a way to tie all of the albums together even though, in many cases, they are quite disparate in their influences and importance. Second, I consider length. This feature is often (even usually) over 2,000 words, and it can be a slog to get through for all but the most dedicated readers. So every few weeks, I try to cut back and write a shorter installment. Readers of volume one of this feature well know that my "short weeks" often end up being nearly as long as regular weeks, but we're going to give it a try and dive right in to this week's artists.

Biz Markie is seen as, arguably, the end of the old school rap era, the final surge in lo-fi sound and care-free lyrical content before hip hop took a darker turn. The tracks are built around basic drum machine beats and DJ cuts and scratches, and the album is unabashedly packed with novelty tracks. Biz never seems too concerned with taking political stances or depicting life on the street throughout Goin' Off. The opening track on the album is called "Pickin' Boogers," and that's about as serious an issue that is tackled on the album.

I am on the record as a fan of hip hop's silly early years, where the genre seemed to mostly consist of whatever kids wanted to rap about at parties on Friday nights. This isn't to say that I don't look forward to the more overtly political or realistic works that are to come, but a song like "Albee Square Mall" is such candy-coated fun its hard not to get caught up in its infectiousness. Biz is a clever rapper, focused on wit and on creating a relaxed atmosphere, and both are here in spades on Goin' Off. Markie gained his reputation as The Clown Prince of Hip Hop by cultivating this persona; where many artists, even in the early age of hip hop were focused on building themselves into legends, Biz seems more focused on making everybody laugh and have a good time.

The album's first break-out single, "Make the Music With Your Mouth Biz" is a testament to Markie's skill as a human beat box, the sort of brag he can easily back up on the track, but also one that seems more fit to his status as a novelty lover than as a rapper hoping to be part of a "serious" new sound. If most of hip hop's early years are full of braggadocio for its own sake, Markie seems dedicated to counteracting any sense of ego with a clownish production sense.

In a genre already full of people attempting to one up each other and arguing over their comparative skill, Biz is a nice reprieve from most of the concerns of hip hop, and more importantly, of life in general. He's a fun, funny guy with a lot of skills that he dedicates almost exclusively to making sure everyone has a good time. He's a guy who formed a unique voice by spending less time rapping about how unique his voice was, but ultimately, he's a wit strong enough that he would stand out in any crowd. If Biz is early hip hop's class clown, he's the one you want to hang out with at lunch, not the guy you're willing to laugh at during math but hoping to avoid for the rest of the day.

When Gram Parsons joined The Byrds, the group was a psychedelic rock outfit that had just released The Notorious Byrd Brothers. Parsons was a Harvard educated prodigy (he studied theology at the University for a single semester before departing to focus on music) dedicated to bringing country music into the mainstream, and to the creation of a new sound he called "Cosmic American Music." When David Crosby and Michael Clarke left The Byrds in 1967, Parsons came to the attention of bassist Chris Hillman. Whether Parsons was ever a full member of the band is contested; his contract involved him as a salaried side man paid by original members Roger McGuinn and Hillman, who were the only members actively signed to Columbia Records.

McGuinn originally conceived of the band's follow-up to The Notorious Byrd Brothers as a sprawling double album history of American popular music, spanning bluegrass, country and western, rhythm and blues, and rock, closing out with a look toward the future with electronic music. Though hired to play keyboard, Gram Parsons was a born front-man, and quickly convinced the group to depart L.A. to record in Nashville. Along the way, the original concept was thrown out in favor of a full country album, covering standards and including original compositions by Parsons and Bob Dylan. The result is Sweetheart of the Rodeo, the first major country-rock album by an established mainstream act. The album was released to little fanfare, becoming the least successful of the band's albums to date, and also heralded Parsons' departure from the group after McGuinn re-recorded lead vocals on some songs Parsons had sung in earlier versions. What may have seemed like a failed experiment at the time has become arguably the seminal country rock album in the decades since its release.

The album opens with the Bob Dylan penned "You Ain't Goin' Nowhere," a song The Byrds recorded three years before Dylan officially committed it to tape. It's a great cover, a beautiful, catchy, and emotive country song that manages to channel much of Dylan's folk-heavy style into the band's intended country sound. Less impressive is the group's cover of The Louvin Brothers "The Christian Life." While The Byrds' version is superior to the original, if only because of the better vocals, its still a song that doesn't do a whole lot for me, both condescending and hypocritical in ways that alienate me. Great country envelopes in even the most reticent listeners; "The Christian Life" alienates when it should welcome, and sticks out on an album intended to mainstream country and find the genre new fans.

"You Don't Miss Your Water," originally recorded by William Bell, is a homesick blues song, an emotive piece that never loses its central catchiness. It's smart, with a solid central metaphor and sung powerfully by McGuinn. In short, its great country. "One Hundred Years from Now" is a Gram Parsons original that mixes country influences with a fairly standard "˜60s exploration of the way the future might view the mistakes of the present. It's a catchy song, and indicative of Parsons vision of a world where country was melded more fluidly with mainstream music. The album closes with another Dylan cover in "Nothing Was Delivered," which bears its author's influence strongly, but still provides a solid end to the record.

Sweetheart of the Rodeo was the first country-rock album by an established rock band (though it was soon followed by Bob Dylan's Nashville Skyline, which we will look at in a few weeks), and it makes a strong argument for country's vitality. Though the album didn't succeed in mainstreaming country music, it did manage to craft a country album of such strength and influence that it would alter the course of the genre going forward. The album is full of catchy country ditties of the sort I can get on board with quite quickly, and from my first listen, it was clear that where some albums I have already covered for this feature proved difficult to access, Sweetheart of the Rodeo was an album I would enjoy delving into, and I imagine it is one that will remain in my rotation long after this feature is over. The Byrds nail the emotions of country music but maintain the catchiness of great rock and roll in a way that improves on both simultaneously.

William "Count" Basie was a jazz pianist and bandleader who lead his own jazz orchestra for nearly 50 years, creating the use of split tenor saxophones, playing up the importance of the rhythm section, and improvising on a grand scale, allowing the entire big band to riff simultaneously. The Atomic Mr. Basie, recorded in 1957 when the orchestra was in its prime, is a stellar collection of jazz recordings, utilizing the sonic landscape big band provides without ceding any improvisational territory in the process.

"After Supper" is a mellow, piano and saxophone driven piece that captures the mood of the late evening quite well. Listen to this and tell me you don't want to pour yourself a nightcap, sit back, and get lost in the music. "Flight of the Foo Birds" is a more upbeat swing number, leaving more room for solos, but still utilizing the wide range of the orchestra quite well.

"Whirly Bird" is a frenetic number in the best way, busy but never overcrowded, while "Midnight Blue" is a slower, blues-influenced number. Basie was always a consummate professional, working well with his band and known for being modest, relaxed, and witty. He ran his orchestra for five decades, and was instrumental in keeping big band relevant long after it had reached its "sell by" date in most markets, Recording with Sinatra, Sammy Davis Jr., and Bing Crosby.

Each of the albums this week showcased greatness on the fringes. Biz Markie kept early hip hop alive with his wit and willingness to clown around and remain silly while other artists were turning to more serious material. The Byrds turned away from the psychedelic rock that made them famous and created an argument, if a failed one, for country's mainstream viability. And Count Basie kept big band going for decades after most other orchestras had fallen out of style. In the process, each artist made an argument for the strength and diversity of their genres, and for themselves as risk-takers willing to go out on a limb in support of their art.

Next week on My Year in Lists: Volume II: