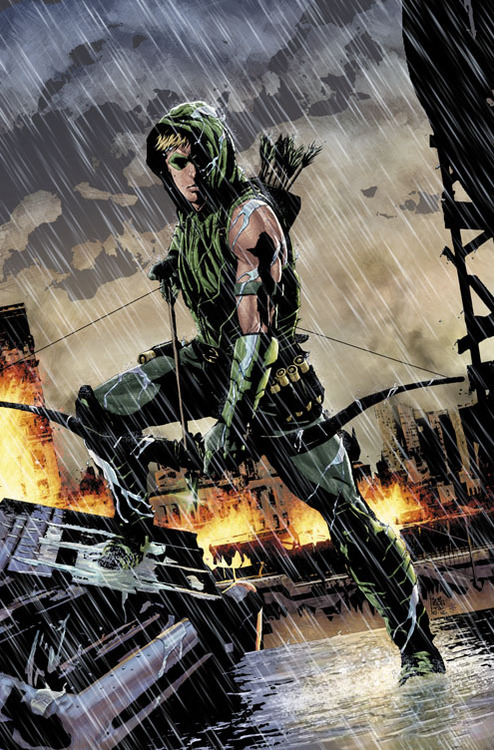 For the first year and a half of the New 52, Green Arrow held the unfortunate distinction of being the poster child for everything the initiative did wrong: a stripping away of the history and characterization that made its lead unique, a whip lash inducing revolving door of creative team changes, and a seemingly perpetual identity crisis. However, better late than never, this month DC made a course correction on Green Arrow and I'm happy to say that the book can now be looked to as the poster child for how DC can improve and elevate other struggling titles.

Readers are introduced to Oliver Queen in a flash forward to the character's imminent death, alone, broken, and stripped of everything he held dear. In the present, Oliver Queen confronts Queen Corp CEO Emerson about his mismanagement of his father's company. Emerson hints to Ollie that there are things he doesn't know about is father or his legacy. However before Ollie can get any real answers, Emerson is murdered by a mysterious new archer, and Ollie is framed for his death. Emerson is just the first of many things Ollie loses in this first issue, and by the closing pages, Lemire has seeded several intriguing mysteries that call for a reexamination of Green Arrow's origin.

Jeff Lemire makes the wise choice of figuratively and at times literally blowing up all the elements of the old status quo. The first 16 issues of Green Arrow were quite frankly a mess. Ollie had become a soulless imitation of a cross between Tony Stark and Hawkeye, and that was before the book entered it's psychedelic phase full of threesomes with genetically engineered triplets and fights against mutant polar bears (don't ask"¦just don't).

Lemire was faced with a daunting challenge when he took on this book. He could not completely ignore what had came before given that a hard reboot had already wiped the slate clean less than two years earlier (publishing time). Additionally the book wasn't selling very well, the main character wasn't particularly likable or even consistent in personality, and his version of the character needed to be distinct from the one currently featured in a very popular show on the CW while still appealing to that show's fans. Stripping away the old status quo as the inciting incident for his run allows Lemire to reposition Ollie without ignoring everything that's come before. Lemire can wring real drama out of the story of Oliver's rebirth and transformation, and the book has a clear direction setting itself apart from other series DC is publishing.

Andrea Sorrentino first caught my attention with his innovative layouts, gritty pencils, and heavy use of shadow. His style is perfectly suited to the noir feel of the new Green Arrow. It's hard not to compare his work to the career defining art David Aja is producing on the critically acclaimed book about Marvel's archer in residence Hawkeye. Like Aja, Sorrentino uses tailored color schemes to differentiate certain sequences and draw the reader's attention to detail. The most graphic depictions of action and violence are rendered in two tones: stark white, and dark olive green. My only complaint with the art on this issue is that some of the layouts work better than others. While some pages are expertly arranged, others feel overcrowded with panels.

Green Arrow #17 is a great issue. It's an exciting new direction for a series that many fans of the character had all but given up hope on. This book is worth your time and money both on its own merits, and for the message it will send to DC that this kind of carefully considered change in creative team and story direction is what we as readers want to see.