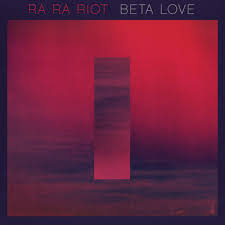 Ah, indie pop, the peculiar genre of indie bands making super happy and radio-friendly music that doesn't get played on the radio for the most part because it's indie. This genre has given us notables like of Montreal, Passion Pit, and Vampire Weekend. Hey, speaking of Vampire Weekend, their keyboardist Rostam Batmanglij collaborated with Ra Ra Riot's singer Wes Miles on side project Discovery, whose sole album (literally named "LP") was released in 2009 and didn't really sound too much like either band. Vampire Weekend had their afro-beat influences, Ra Ra Riot had string parts, and Discovery was completely synthesizer-based.

Beta Love opens with the playful "Dance With Me," which features a simple synth and drum beat with Wes Miles belting "come and dance with me bittersweet fool/I wanna be your toy" in a borderline falsetto voice. It's like the bastard child of Matt & Kim and Passion Pit in some ways, and seems like it was only chosen as the album opener for the high energy. However, the next two tracks "Binary Mind" and "Beta Love" are definite top tracks on the album; "Binary Mind" has a strong driving beat with one of the album's few guitar parts during its chorus to keep up the energy, while "Beta Love" is dominated by a repetitive yet catchy synth melody that reminds me of some of the better tracks on Discovery's LP, occasionally punctuated by strings.

If these two tracks are its ups, then Beta Love is not without its downs, of which there are many on the album. "Is It Too Much?" could have come from a previous Ra Ra Riot album, although its monotony would have made it more filler than a standout track. "For Once" has a pretty cello harmony that is buried by a synth part that sounds like it could be played with one finger and the closing guitar part is too little, too late. And then there's "What I Do For U." Fuck this song. I hate the title that uses "U" instead of "you," I hate it's three-note bass part, I hate it's falsetto screeched vocals. I have no idea why Ra Ra Riot made this song, but thankfully it's the shortest on the album. "When I Dream," "That Much," and "Wilderness" aren't really that memorable, all three being more low-key tracks amidst what tries to be a high-energy album.

There are other high points though - "Angel, Please" and closer "I Shut Off" are both great tracks that show the synthesizer wasn't a total loss for Ra Ra Riot. The former features a Matt & Kim-like simple synth part and an explosive chorus while the latter is one of the more dynamic songs on the album and actually features a keyboard solo and a closing string part.

Beta Love has its high highs and its low lows, and to mention Matt & Kim a third time in this review, it sure sounds like they took some lessons from this particular indie pop duo. However, Ra Ra Riot aren't a duo nor can they thrive on synthpop alone, unless Wes Miles wants to slowly make Ra Ra Riot sound entirely like Discovery. But for the most part Beta Love's great tracks come from their depth and dynamic instrumentation, such as the occasional solo and the recurring string parts on high energy tracks. And while the lyrics aren't exactly too profound on Beta Love (The chorus of "Angel, Please" is "Oh angel please, please stay with me,") I can't come down too hard since I feel listeners go to Ra Ra Riot and indie pop in general for catchiness and choruses you can sing along to over deep introspections (take that Arcade fire). Essentially the lesson learned from Beta Love is tone down synths, keep up strings and occasional guitar, Wes Miles can do whatever the hell he feels with his voice, and never, ever make anything that sounds like "What I Do For U."