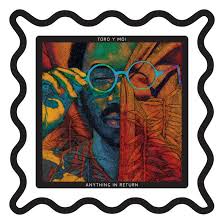 Yes, Darren used the word "chillwave" in the "bottom line" up there. No, he doesn't know what it means except that it kind of involves a lot of synth effects and looped samples.
Keeping with the tradition of chillwave musicians really being just one guy that uses an odd stage name, Chaz Bundick is Toro Y Moi. And while I haven't listened to anything else before this album, Anything In Return definitely made me a fan.

The two other artists I listen to described as "chillwave" (seriously such a ridiculous name) both seem to have their established sounds; Neon Indian has his retro 80ish sound that reminds me of old computer programs and Washed Out has his minimalist electronic beats. Toro Y Moi in contrast, is more pop-sounding than both, and Chaz Bundick really lets his vocal talents show instead of using any distortion in his voice.

Anything In Return opens with "Harm In Charge," which sets the tone of the album with its shifting drum beats, intermittent piano layer, high-pitched synths, chopped-up vocal samples that sound ripped from soul songs, all topped off with Bundick's vocals. In other words, it's a multi-layered musical collage. Second track "Say That," follows the same pattern with bit more funk, though the sampled "da-da-da" vocals are potentially grating.
Third track "So Many Details" is a real standout and seems to be the most popular single of the album so far, which it deserves as a fantastic song. Starting out with a breakbeat and heavy bass part that make it sound like an R&B song, a heavily-distorted synth part one-third into the song marks a somber moment - Bundick asks "What happened to the time we had? I thought you said you won't ever - won't ever leave me. What happened to us?" while a female vocal sample simultaneously says "I know I promised to wait, but it's been so much longer. I really did try." POW! RIGHT IN THE FEELINGS LISTENER. The song then resumes the beat, but now you know that the song is more of a gloomy plea than a sexy R&B tune.

The next slew of tracks have a more chilled-out tone to them, with subtle synthesizer parts and slower drum beats. "Touch" for example seems almost minimalist with its odd time signature and sparse vocals, while "Studies" starts to pick up the tempo with Bundick's falsetto vocals and a beat that could be the backtrack of a hip-hop song. None of these tracks are bad at all, but they do bring down the energy with their mellowness and seem awkwardly sandwiched between two strong parts of the album.

After that, the following tracks are more R&B than the rest of the album, both in terms of their beats and lyrics. The slow beat of High Living with lyrics like "We'll be living high, we'll be living low, I can't give it either way I don't think I know," reminds me of something Frank Ocean might have done, while "Grown Up Calls" mixes the musical collages of the opening tracks with an R&B beat. "Cake" is likely the most pop-sounding track on the album, with its high energy and chorus of "she knows I'ma be her boy forever," which oddly enough works well to build the album's variety of styles and sounds.

The remainder of the album is just as mixed as the album as a whole, with "Day One" being fairly mellow only to be followed by "Never Matter," the most energetic on the album. This track is another standout with its scattered hip-hop elements, pounding synths, and 90's sounding keyboards that altogether make it one of the more dance-friendly tracks. Closer "How's It Wrong?" follows suit, albeit slightly toned down.

If Anything In Return proves one thing, it's that Chaz Bundick can really make a killer beat and layer different synthesizer lines and vocal samples very well. He's also a pretty good singer, and his vocals really do make a lot of the songs on the album. My main criticism of Anything In Return, though is that on the whole, the tracks can blend together at times, particularly in the middle, as they seem to have been grouped by their style and energy. On their own each track is great, but listening to it several times though you may go "wait, which track was that? I listened to it?" Still, if you enjoy chillwave (you filthy hipster music snob), mellow electronic music, or even R&B, I strongly recommend giving Anything In Return a listen.