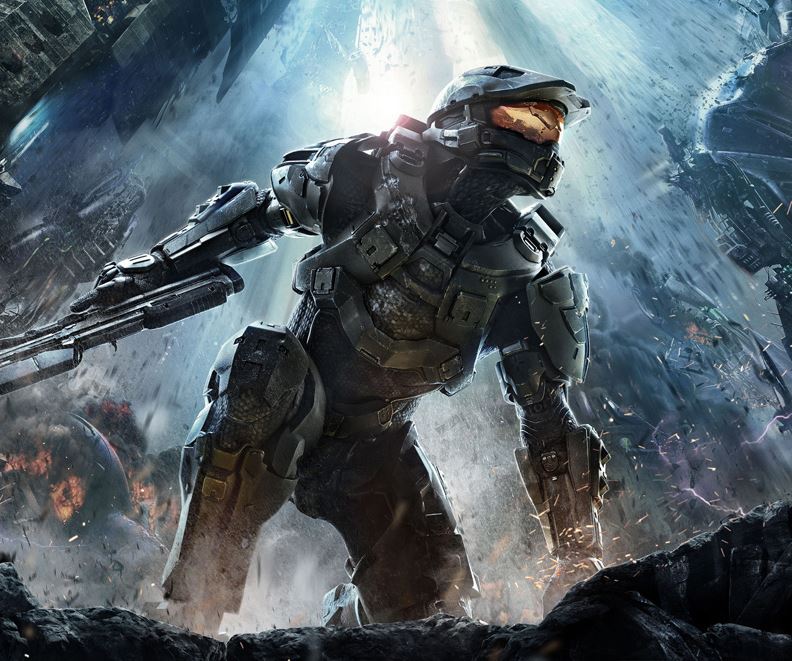 What defines humanity? In a world where humans are hardened Supersoldiers designed to think only of war, and machines literally think themselves to death on moral ideologies, who's to say what humanity really is?

You'd probably never believe me if I told you that this was the premise of the newest Halo game. I wouldn't believe me. A game series frat bros play while shotgunning Natty Lights to get them in the mood to bang that Tiffany chick at tonight's mixer IS FORCING ME TO PHILOSOPHIZE?

Well, the stunning truth is that yes, it is. For over a decade, development studio Bungie created the Halo series, which jump-started a game console shooter era, single-handedly saved the Xbox, and landed the company over $3 billion in sales. From Halo to Halo Reach, Bungie defined what a casual multiplayer shooter experience should be.

So expectedly, all eyes shifted to 343 Industries, who took over the series in a startling announcement a few E3's ago. Gamers were nervous as to the ramifications"”changes were definitely coming, but with all the pressure 343 had a lot to live up to, would the changes be good? Fortunately, Halo 4 has proven that the changes were definitely good. Not only has 343 stuck true to the casual multiplayer yet intense first-person shooter formula that Halo fans are used to, but they've also upped the story content surrounding the gameplay, with emotional interplay between Master Chief and his AI companion Cortana taking front stage.

Halo 4 marks the first entry in the new "Reclaimer Trilogy", and takes place nearly five years after the events of Halo 3. The Chief is still asleep in his cryo-chamber aboard the UNSC vessel Forward Unto Dawn when it enters orbit around the Forerunner-created planet Requiem. With Covenant forces also in Requiem's orbit, Cortana, the Master Chief's artificial intelligence ally, wakes him up so the pair can fend off the incoming Covenant attack.

Meanwhile, Cortana is starting to undergo "rampancy", a condition for older AIs in which they actually think themselves to death (Cortana says it's like having 1,000 arguments with one's self). While helping Master Chief, she tries desperately to hang on to her sanity, with the Chief being the only one to help her through the crisis.

While the storyline is not nearly as convoluted as the past games have been, it's arguably the strongest as a microcosmic study of humanity itself, represented by its two main characters. The Master Chief is still the strong military type, but he has more spoken dialogue here than the first three games put together. 343's bigger focus on the Master Chief this go around finally brings some depth and makes you feel something for the character beyond him just being this supersoldier badass. Cortana also seems more emotive than before due to her condition, and it's the ironic interplay between the two (Cortana is the emotional worrywart to Chief's logical stoicism) that really brings the story to a new level.

Gameplay-wise, there's a lot of familiarity that fans will appreciate. There are eight missions in the single-player campaign, with plenty of weapons and vehicles from which to choose. The levels are enormous, but the paths you take are linear and easy to follow. Level pacing is as hyperactive as it's always been, whether it involves you attempting an objective or fighting against a group of enemies. You'll encounter Elites, Jackals, Grunts, and Hunters, and vehicles like the Ghosts, Banshees, and Wraiths make appearances. You can also still play four-player co-op online and two-player co-op locally.

New additions to the gameplay supplement the already working formula. New Prometheans pack quite a wallop, with forces like the Promethean Knights teleporting around the map while dual wielding a projectile weapon and a melee weapon. Armor Abilities have also been given upgrades, as in single-player mode, you can swap out Armor Abilities as you find them. New Armor Abilities like Promethean Vision (essentially infrared) Thruster Pack, Hardlight Shield, and Autosentry, a small automated turret, all provide interesting new combat options. New guns also appear, like my personal favorite, the Saw, which is a combination of a saw and an automatic machine gun (SPLOOSH!!!).

Multiplayer, now known as War Games, has also brought about some welcome changes to the multiplayer formula. The most notable one is with the progression and loadout system, whichgives you full control over what primary and secondary weapons, and other weaponry you want to bring in five custom loadout options (first you have to earn your arsenal by ranking up). Other big changes are the Tactical Packages and Support Upgrades, which you can equip to your Spartan to give him unlimited sprint, carry more grenades, reload guns faster, and so on. Think Perks from Call of Duty without the ability to unfairly stack them to your extreme advantage. Finally, multiplayer modes get a lot of new twists: Capture the Flag now sees the flag carrier using a more powerful pistol, the hilariously punned the "Flagnum", while holding the flag. King of the Hill, SWAT, Team Slayer Pro, all return, as do Grifball and Oddball, though now players can actually pass the ball to each other like in basketball.

In short, at its core, everything still feels like a Halo game. 343 Industries have done a remarkable job at continuing the Halo legacy. Not only did they stick true to the formulas Bungie immortalized, but they also brought forth a major focus on storytelling while forcing the player to sit back and truly ponder, "Are we human? Or are we dancers limited in our perception of what "˜human' actually is?"

So frat boys beware, and gamers rejoice: Halo 4 proves the series is in the right hands with 343 Industries, and it's heading off into a glorious new direction.

-The story is solid, but makes a lot of past inferences to the game's lore that newcomers may not pick up right away. Some kind of refresher would have been nice.

- Why is my Halo game trying to make me cry?? Cortana!! CORTANAAA!!!

-The AI has totally improved, and you can tell. No longer will your friends stupidly charge enemies when they're barreling toward you in the biggest vehicle possible.

-Snipers rejoice: you'll no longer be kicked out of your gun's scope when you take enemy fire. Now we can assassinate people the way God always intended us to!

-The visuals and sound design are PHENOMENAL, and rival Mass Effect 3's work. Comparing Halo 3's visuals to Halo 4's is a joke, as Halo 4 blows the former out of the water.

-WHY IS MY HALO GAME TRYING TO MAKE ME CRY??